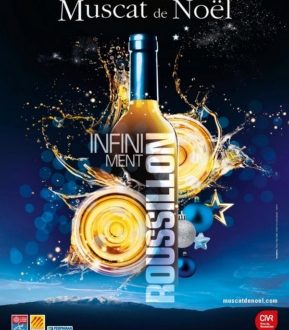 MUSCAT DE NOËL is celebrating its 20 years of existence and 20 years of constant growth in volumes.

Muscat de Noël – a “mention primeur” of the AOP Muscat de Rivesaltes – is not only here to announce the arrival of a new vintage, but also to embellish your holiday spirit and dinner tables with the taste of a Vin Doux Naturel that was decorated this year. In 2017, production reached 530 000 bottles, for which its commercialization began, like for every year, on the third Thursday of the November, i.e. on the 16th of November 2017.

In the Middle Ages, the first Muscat of the year was traditionally served on the dinner tables of Barcelonan nobles to accompany their Christmas banquet. The custom later evolved towards a family setting, a tradition that has been passed down from generation to generation until even today. In 1997, a few passionate winemakers decided to open up this tradition to as large an audience as possible, by creating, within the AOP Muscat de Rivesaltes, a specific denomination Muscat de Noël. This Muscat rests on very precise regulations of production and commercialization: a bottling process that will end on the first of December, at the very latest, and a commercialization that can begin on the third Thursday of November, after the Muscat have been tasted and validated as a Muscat de Noël.

Produced by more than a hundred wine holdings, the production of Muscat de Noël in 2017 reached 530 000 bottles, against 20 000 bottles twenty years prior. Approximately 50% of the bottles will be commercialized in the Pyrénées-Orientales and l’Aude, sold to both cellars and distribution outlets. 45% of the bottles will be distributed throughout the rest of France, through cellars, in majority within île-de-France and Occitanie. The 5% remaining are destined to export, mainly towards Northern Europe (Belgium, Germany, the Netherlands…). The average bottle’s price is of 9€, making Muscat de Noël an affordable terroir wine for all your Winter holidays!

A WINE THAT COMES INTO THE STRATEGY OF ROUSSILLON WINES

Muscat de Noël, which represents 5% of the sales of AOP Muscat de Rivesaltes, has today entrenched itself with Roussillon Wines overall strategy. Commercialized a few weeks after its harvest, it grants, first and foremost, an undeniable economic advantage to local operators. It also ensures good media presence for Roussillon Wines, contributing to its overall notoriety. Lastly, its commercialization allows for a very large target audience, who will appreciate the savor of the freshly picked grapes. The grand public will be sensitive to Muscat de Noël’s festive packaging and multi-facetted character – as it can be served in the context of an aperitif or for a more traditional dinner.

ROUSSILLON, THE MOST SOUTHERN OF FRENCH VINEYARDS

Laid out like an amphitheater, between the Pyrenees and the Mediterranean, Roussillon’s historical vineyard extends over 21400 hectares of grape vines classified into 14 AOPs and 3 IGPs. 380 domains, 25 cooperative cellars and 30 negociants produce around 100 million bottles per year: three-quarter of which in dry red, rosé and white wines, and one-quarter in Vins Doux Naturels.