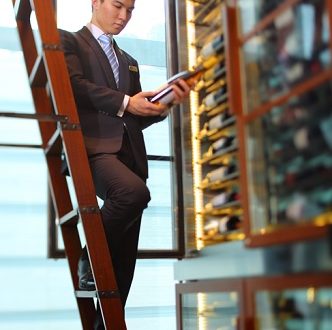 The National Chinese Sommelier Competition is organized every year and gathers the 10 most talented sommeliers from across China. This year’s competition was extremely competitive and saw competitors from some of the most prestigious institutions in China compete for the title of Chinese Champion Sommelier. The 2017 vice-Champion was Jasper Sun, from Shangri-La Jingan in Shanghai, who will have the privilege of visiting Roussillon vineyards in 2018.

Jasper is the Director of Wine for Shangri-La Jingan in Shanghai. His award of vice-Champion of the Chinese Sommelier Competition adds itself to a long list of titles:

GQ, Vogue, the CCTV, the Discovery Channel have all been interested in this young sommelier and have published or aired interviews of him. He is now well known in wine, magazine and television circles, amongst others.

Indeed, his award of visiting Roussillon vineyards is both well deserved and will bring Shaangri-La Jingan’s young Director of Wine the unique opportunity to delve into one of the most reputed vineyards in France. But, what will be Jasper Sun’s next move?